The Enterprise Viewpoint considers the policies, funding incentives, working arrangements, and jurisdictional structure that support the technical layers of the architecture. It provides the basis for understanding who the implementers will be and the roles these implementers could take in implementing ITS. The Enterprise Viewpoint is also the source for objectives and goals for the surface transportation system. It also includes the policies and processes for architecture use to support transportation planning and project development.

A host of actors from the public sector and the private sector make up the Enterprise Viewpoint. Within the realm of public sector investment, the relationships between the actors have become rather established. This is in large part because ITS deployment decisions can be considered part-and parcel of the larger transportation investment decision-making process. This process has matured over the last 50 years of major infrastructure development (e.g., the interstate highway system). A cornerstone of this process is the strong legislative underpinning stemming from Title 23 of the United States Code (USC), the most recent reauthorization of which was the Safe Accountable Flexible Efficient Transportation Equity Act: A Legacy for Users (SAFETEA-LU). From the vantage of the private sector, both the automotive and communications industries have been major participants in developing various consumer products and services related to ITS. Various classes of actors participate in ITS deployment, operations and other aspects of the system lifecycle in reasonably well understood ways.

The following table shows the symbols used to represent elements of the Enterprise Viewpoint: 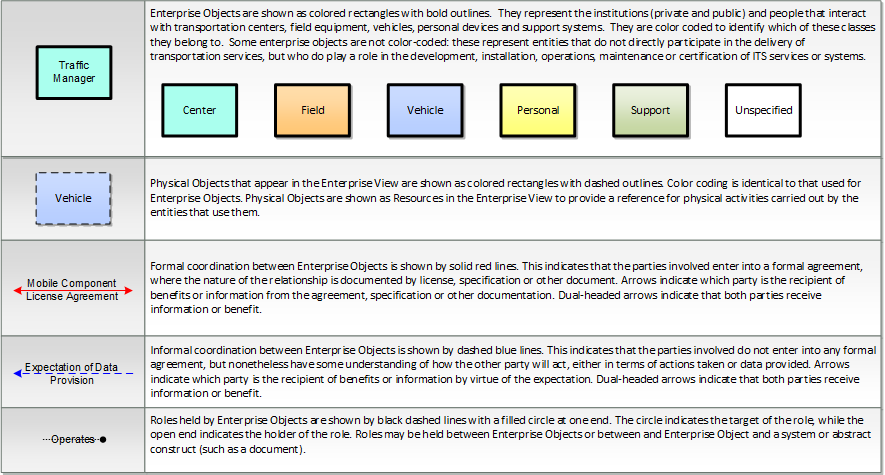